skip to main | skip to sidebar

I’ve got a bone to pick with Julie Andrews.

Ray, she trilled, a drop of golden sun ... well not from where I’m standing, duckie. We will come separately to her other criminal acts of misrepresentation because, for example, there hasn’t been crisp apple strudel in Austria since the invention of the microwave gave all restaurant re-heated filo pastry the taste and texture of a well-used wash leather, and the only ‘Doe, a deer’ you are likely to see is in a noxious casserole called Damhirschgulasch wherein the lumps of venison leg are cooked so long and so exhausted of flavour that only the gravy is worth consuming. It is universally presented with Salzburger Griessknockerl, a wet semolina dumpling I can only translate as ‘poultice’.

Returning to Dame Julie’s meteorological predictions for Upper Austria: in the last ten days we have had at least eight of rain, but in between clouds at eyebrow levels, chilling fohn winds which I used to think were a figment of my Geography master’s imagination, hailstones the size of mint imperials and, God help us, on Wednesday a tornado. But sun, no.

It was therefore with a slightly heavy heart I sploshed through the puddles towards ‘Bob’s Special-Tours’ minibus Sound of Music excursion, to be greeted by a driver-guide of approximately the shape and features of former home secretary Leon Brittain, in lederhosen and brogues, announcing ‘today I will be your Captain von Trapp’. 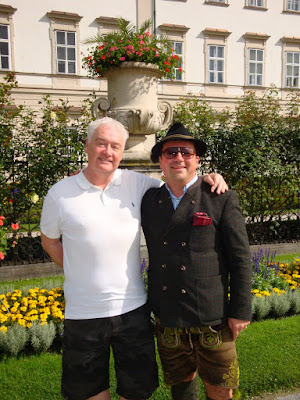 Actually, his relentless jollity and enthusiasm for the movie and the Trapp family history were wildly infectious and - once I managed to blank the bigoted religious California Republicans in the back seats (“The Amish are such beautiful people” which for me was really right up there with “The Fuhrer was a wonderful dancer” in its irrelevance to any discussion of dogmatic sectarianism) - the tour shaped up very well indeed as we were swiftly conducted from one film location to another, and in a group of just 8.

Obviously the tales of the movie have been re-told often enough to pass in to folklore, but a couple I had not heard included the suggestion that Maria – an orphan of uncertain origins and quite a feisty girl - was lured into the convent by a cute young priest who suggested he might be able to visit her occasionally, and secondly that her role there was as a teacher in the school run by Nonnberg Abbey, not as a postulant.

Of course we saw the venues of the wedding, the abbey, the gazebo, the gardens where the kids learn Do-Re-Mi, the white facade of Leopoldskrone Palace used – at Maria von Trapp’s suggestion – in place of their real and more modest house, and the alternate yellow wall of Hellbrunn against which for some reason Christopher Plummer is most often photographed even when apparently conversing with Eleanor Parker or Julie A outside the other building.

Our guide played us various snatches from soundtracks, including one direct comparison of Julie Andrews and Mary Martin each singing the same song which confirmed Noel Coward’s observation (I am reading his Collected Letters this week) that Ms. Martin’s voice was exactly like someone fucking the cat. We also heard a couple of tracks of the real Von Trapp singers, made in the 40’s and astonishingly clean and clear recordings. They really were quite good, although not remotely in an ‘Edelweiss’ way.

During the tour there was quite a discussion about the snobbishness of the Salzburg authorities towards ‘Sound of Music’ even though a recent survey suggested 75% of the city’s tourist revenues were derived from the show’s fans, preferring to cleave to the associations with Mozart despite the fact he left Salzburg aged 25 and never returned. This apparently includes refusal to grant a hotel license to the couple who have recently taken over the actual Villa von Trapp for B&B and corporate event purposes, although they omitted the step of applying for the license before holding their opening party. I am filled with uncertainty since I’d booked to spend the night there. 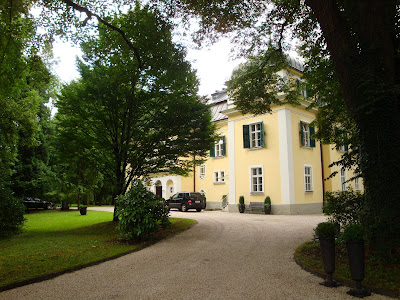 Which I did. The journey there was uneventful, the house is a reasonably handsome detached villa in about five or six acres of grounds but approached from an ordinary residential street – where apparently all the neighbours, many of whom are lawyers, are opposed to its use as a guest house. This is further complicated by the fact that the operators do not own it, but have a twelve-and-a-half year lease from the monastic order to which it DOES belong.

I arrive about 4.30, reception hours being 3-7pm and despite ringing various bells with the enthusiasm of Quasimodo, no-one comes to answer. The female taxi driver offers to wait with me in case I need a ride elsewhere, but I bravely dismiss her and phone the property whereupon a man who looks as if he has been sleeping in his clothes, but turns out to be the proprietor, says he’ll be down in a minute.

He isn’t, but I am eventually admitted and shown to the room of Maria's eldest daughter, on the second floor where the family moved to make room for paying guests after the Baron lost his fortune in the collapse of a private bank. Topical or what?

It’s austere but adequate and when I ask if it would be possible to have a room with a bath instead of just a shower, he tells me there are none because the monastery – which renovated the property – felt they would be too indulgent. This turns out to be a lie because the following morning on a tour of the place, I see unoccupied rooms with baths.

Since apart from breakfast no food or drink is offered – not even a cup of tea – I set off for an evening in Salzburg and return at about 10 to find the place again shut up like a tomb, and what few lights are available in the hallways are on impatient timers, so I am pleased to attain my mansard space and get ready for bed. It rains ferociously during the night, although unfortunately without the dramatic thunder and lightning sufficient to encourage the ghost of Fraulein Maria to come and sing to me.

There is an incident. The bed is a white-framed job which, although I am not an expert in its products, looks suspiciously to me like something from Ikea – and as I turn over in my sleep at about 2 a.m. there is a sharp noise and the bed-frame gives way, depositing some of the supporting slats on the floor. As there is no bell, no telephone, and no instructions of how to contact management in case of emergency, I sleep on a slope for the rest of the night. Management, by the way, is entirely unconcerned when this is reported in the morning.

Breakfast is a cheerless array of pre-packed portions of this and that, no hot food, and whilst the dining table is imposing the chairs have allen key connections betraying their flat-pack origins. I check mine carefully in case like the bed it shows a propensity to return from whence it came.

Eventually I meet the four other people staying in the house – a couple of charming Midwesterners you’d find anywhere on a tour of Europe, and a very bright Dutchman with his ten year old daughter. We have a lively conversation mostly about Hitler, and the day genuinely brightens.

There is, incidentally, no evidence to show that Hitler ever visited. The villa was requisitioned by Heinrich Himmler in 1939 as his own residence and headquarters for the war.

Management returns and we embark on a tour of the house which consists mostly of unfurnished public rooms which can be adapted for use in seminars and ‘events’ – apparently the liveliest so far was the arrival of all the candidates in the Belgian ‘How Do You Solve a Problem Like Maria’ search-for-a-star TV show. It’s all rather underwhelming – one of the bare rooms is a former chapel but the others are just as spartan, and then it strikes me that the place has no heart, physical or hospitable, and that this is a wasted opportunity in entirely the wrong hands. Suddenly, the attitude of the Salzburg city fathers doesn’t seem so unfair. 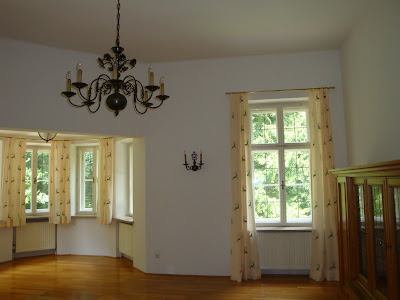 It turns out that the proprietors have no professional hotel experience, being journalists or somesuch, and the under-investment in making the place into a destination for Trapp family enthusiasts is palpable. With more imaginative and enthusiastic hosts, it could be modelled on the scenes from the movie, at least have a room furnished with sofas and drapes in the green and white pattern from which Maria made the children’s clothes. It’s possible to respect the monastic ownership of the property without turning it into a theme park, but somewhere to sit and have a drink in the evening, possibly with the DVD of the film would be a start.

They’re also, IMHO, going out of business. We have to sign an official register for the tourist authorities, at the rate of one page per room. The book is dated from 1 December 2008, and I notice my page is No. 78 – so about 150 guests in more than 7 months.

Still to come – a gay romp with Adolf and Eva at Berchtesgaden ...
Posted by JohnnyFox at 17:17

Not quite a Mad Man, but close

This is a Flickr badge showing public photos and videos from blowstar. Make your own badge here.